This is my number. Who wants action?

I’ll take the under since he was scratched

After our loss last night, I watched the end of the Brewers@Giants game. Giants D has fallen way off. Some egregious mistakes. Their “Villar” is a nightmare so far in the infield. Brewers have pitching for days, etc.

A single to right, Hader has the runner picked off, but he evades the tag at 2nd. Hader hits a guy with a 99 mph heater, right on the triceps. Then he walks the bases loaded. Still one out. Yaz hits the first pitch over the centerfield wall for the Giants’ first walk-off salami in 49 years.

At this point: gimme just ONE game like that for the Angels this year. Among their final total of…what? 67 wins? 72?

Pretty impressive; especially since it came off of Hader !!! 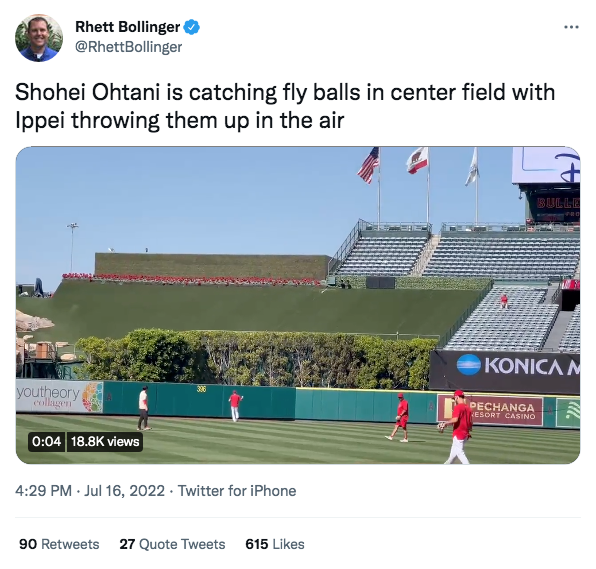 Veen got a slap single to LF

On days the writers don’t want to do a post game write up, we should at least get a 2 word “We lost” post

Yea, when they aution us about being overly, relentlessly negative, I can only imagine them saying, “What? I’m up now for a potgame? Eff that! I’d rather say nothing than sound like a miserable Angels fan. Take Mike Salmon, for instance. What. A. Bore!”

Going into tonight’s final game of the 1st half, the Angels have a 3.9% chance at the top pick in 2023 MLB Draft. Another dismal half looks like is in the making which will help elevate the percentage. Issue is, outside of the Tigers, everyone else is playing for next year.

But even the teams with 3 worst records each have only a 16.5% chance at the top pick so BFD. We can’t even pick the right year to tank. https://www.tankathon.com/mlb/pick_odds

Sadly, Angels have been tanking the last two years but at least with this system, there is a chance, right? Sure, percentages might be small but not compared with the other 18-non playoff teams. Otherwise As or Nats would get top pick and that is that, then it is all reverse order. This is like the NBA but that lottery is for the first 3-spots vs. 6 spots.

The bigger question is what does it all mean? Based on recent history getting the top pick does not mean much…

Just look at all the # 1 pick busts MLB has produced over the last 10 years… This is definitely not comparable to the NBA or NFL where it actually pays to tank..,

Here it is pretty much a big waste of time…

I wish they had minor league merch at this futures game

What do they do with all the unsold items? That would be a logistical nightmare trying to guess who would buy what

Scioscia got the loudest ovation by far

Fat kid is back 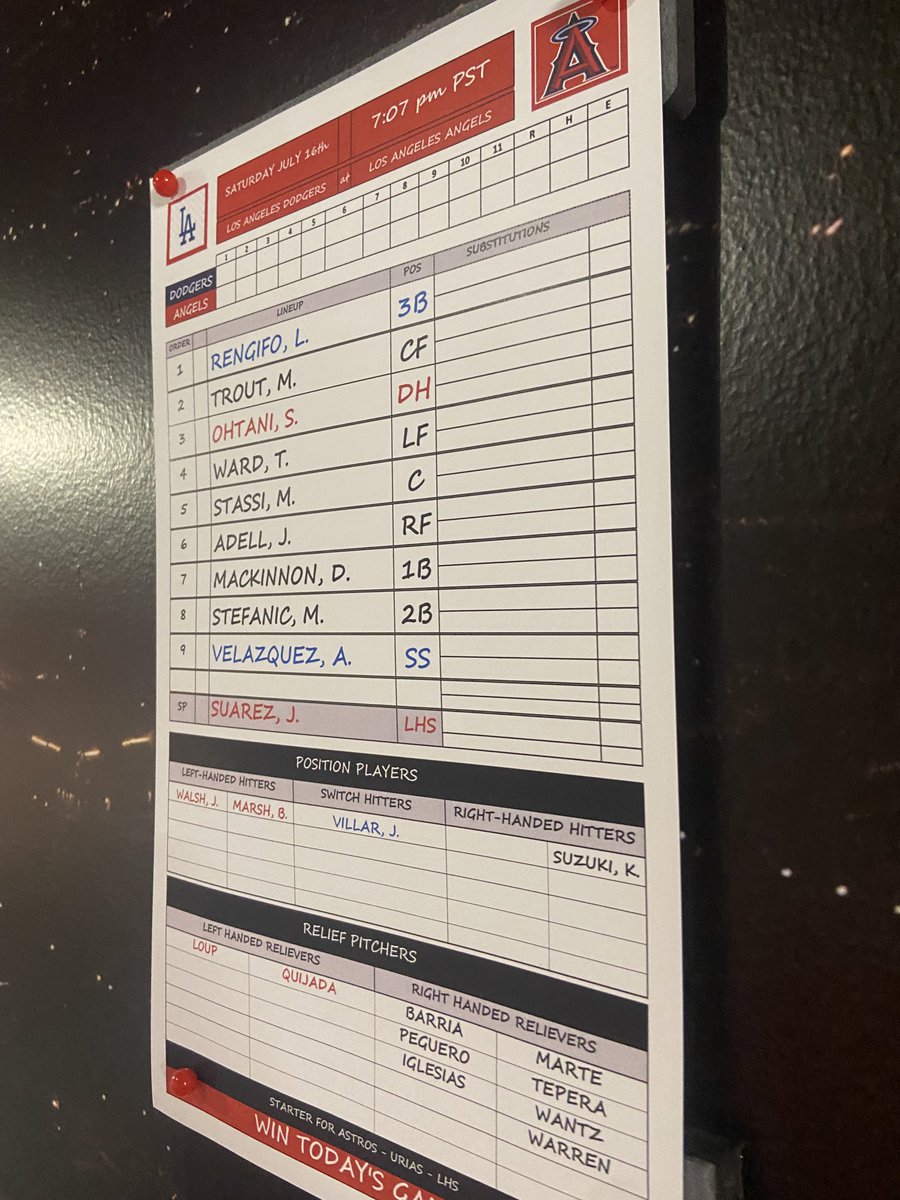 Trout in the lineup, I’ll take it!!

What are those words at the bottom? Don’t recognize the expression. Got cut off in the photo.

Hahahhahahaha. They even f up these lineup cards

That and the “Win Todays Game” seems funny

I like MNT in the lineup vs on the bench.

Ky Bush going to light it up!!

I just patented that nickname

Full disclosure though. If it lasts more than 24 hours you might want to see a doctor.

That is only good if he is getting lit up. 🔥

What if he is good?

no amazing Criswell for us any more. Claimed by Toronto.

Tampa? One of those T teams. Thanks.

Very interesting news I just read on MLBTR about Soto. Was like deja vu reading it with all the parallels to our Ohtani situation. Some interesting lines in there comparing to the Cubs… all which I can’t help compare to us. Makes it more clear to me that trading Ohtani is imperative… unless Arte gives in and hikes up the payroll.

Yeah, I hope Arte does hike up the payroll. We cannot afford to lose our Ace.

We will not find another like him, or close really.

The CBT threshold moves to 233 million next year. We are currently at 206 million. Thats not alot of increase considering our established 2023 obligations for MNT, Redone, Fletch, Stassi, Iggy, Pooop, Tepera and an Arb estimate for Shohei. I put that number including player bennies and 40 man salaries at about $167 million. That leaves only $66 million for Arte to fill out 18 roster spots Including 5 starting pitchers, 1B, 2B, LF, RF , Backup C, 3 bench spots and 5 bullpen flotsam/Jetsam. Of those TBW, Sandoval, Rengifo, Canning (who may get NT) & Barria (who also may get NT but I doubt it) are all Arbitration eligible for the first time. (Anybody want to take a stab on those amounts? Maybe 20 Million total? ) Also Detmers will be back and at least Marsh and/or Jo Adell. And I would also guess Quesadilla & at least one of the A & W brother at around the league minimum. (say around $4.5 million?) Even if Arte agrees to spend up to threshold That leaves less than $42 million for 3 starting pitchers, 1B, a backup catcher, 3 key bench spots and 3 bullpen spots all of which have to perform above replacement if we are to improve.

Good luck with filling a winner with that. Especially if the offense and bullpen aren’t drastically improved

Yeah, Arte has to increase his commitment. As for pitching, hopefully Bachman and/or Bush will be ready to contribute next season… I would think that by May or June we should have some pitching reinforcements, if not on Opening Day. That would obviously help alot. We will need it since probably both Thor and Lorenzen will be gone.

And be able to coach them up.

We did (try to) sign them–that’s the dumpster diving that we complained about bitterly. That’s how we got the likes of Cahill. Most of them turned to dust.

Then there’s the question of 1) who are available for acquisition, one way or another; 2) will they pan out? I’m far more worried about 2) than 1).

I lost a game somewhere. I thought we were 39-50 entering last night’s game but I see there was an extra “bonus” loss that I forgot.

hahaha. i tried correcting you last night. I think we were all in the fetal position while posting and couldn’t see anything else but our own comments.

So are we going to use this same game thread through the All Star break?

I heard the masthead is “day-to-day” … meaning they are all undergoing emergency lobotomies.

you made me laugh. Luckily, no coffee involved.

I think this site was lobotomized a long time ago.

Everyone can come out now!

What did you do last off-season, Minasian?
Look what the Doyers did?

Tyler Anderson has been added to the National League roster for the 2022 MLB All-Star Game in Los Angeles.Nice. This is a fun one. Anderson generated absolutely zero buzz when he signed a one-year, $8 million with the Dodgers during the offseason and has earned a spot in the Midsummer Classic by posting a strong 2.96 Era, 1.02 WHIP and 81/17 K/BB ratio across 97 1/3 innings (17 appearances, 15 starts). He’ll join his fellow rotation mates Clayton Kershaw and Tony Gonsolin on the senior circuit’s pitching staff. It’s his first-career All-Star Game appearance.

Doyers have the magic

It’s called a good front office. We have a goof one.

well goof is close to good, in the dictionary

Hey at least we had interest. https://www.mlbtraderumors.com/2022/03/angels-interested-in-tyler-anderson.html

But his current success would be assuming, of course, he could have benefitted from our stellar coaching.

We’re now a game ahead of Pittsburgh…which has a $67 mil payroll. Perhaps we’ll win today.

How about Juan Soto rejecting a $440 m offer from the Nationals and now being ‘available’ (per the Nats) for trade?

Ohtani is about to be worth a half billion dollars.

Which again is why I think the smart baseball move is to trade him.

Or spend some real coin.

I’m with ya. Adding to our top heavy payroll is not the solution.

But we have to maximize returns for him. And I worry about our front office being able to accomplish that.

And Trout is a bargain.

He has been his whole career

The Nationals brought this on themselves. If they could decide what direction they are going in then maybe they would not be in this predicament… I mean, they get rid of Scherzer and Trea Turner and previously Rendon. They basically bust up a World Series team to “rebuild”, so what did they expect Soto to do ?

So your saying he is rejecting the Nats not the $440 m?

Yes, that is exactly what I am saying.

That 400+ OBP would sure look good on the Angels.

reading about it I can understand why. It’s a lot of money but over a very long period so the yearly amount is less than what he can get from a shorter deal. When the top players are getting $35 mil per season now, he (and Boras) don’t want to settle for $29 mil. With the inevitable inflation you know $29 mil won’t buy as much in 2038. Sure, for you and me, that’d be plenty but if one needs a mansion, well….

If baseball survives Manfred then the top salaries in the 2030s will likely be in the $50mil per year area, thus the rejection of the deal.