We have had lots of injuries so far this week in Major League Baseball.

Let’s Start With The Pitchers

I have lots of injuries to report today concerning pitchers. Stephen Strasburg was not pitching well on Tuesday and left the game early.  He had tightness in his trapezius.  Well, now they say it’s his neck and he’s gone on the injured list.  Cardinals ace Jack Flaherty is on the 10 day IL with a “significant oblique injury.”  Former Cy Young winner Mike Marshall died at the age of 78. RIP.

Next Come The Infielders

There are also lots of injuries to position players. Twins catcher Mitch Garver took a foul tip to the groin and had to have surgery because of it.  Ouch!  They don’t know right now how long it will take him to recover.  Fernando Tatis Jr. was removed from a game as a precaution with oblique tightness.

The Mariners just lost outfielder Kyle Lewis to the injured list with a torn meniscus in his right knee.

Ramon Laureano went to the ten day injured list with a right hip strain, retroactive to May 28.

Bob Brenly, calling a Diamondbacks game on Tuesday, made a rather questionable joke about Marcus Stroman’s durag (or do-rag) and all hell is breaking loose.  He says he’s sorry.   Brenly and the Diamondbacks agreed that he should do a little sensitivity training.  The game itself had already been a little bit intense, with the benches clearing after the Diamondbacks half of the fifth inning.

Kai-Wei Teng, a pitcher in the Giants farm system, was suspended for ten games by Minor League Baseball for having a foreign substance on his glove.  In all, four minor league pitchers have received such suspensions so far this year.

The Giants recently made a number of roster moves, including optioning Nick Tropeano.  Connor Cannon is the player to be named later from the Mike Tauchman trade between the Yankees and the Giants.  He has 80 grade raw power and 20 grade speed.  Kevin Pillar is back from the injured list.  That’s pretty amazing as far as I am concerned. Dylan Bundy, Andrew Heaney, and Raisel Iglesias all made this list of top 40 trade candidates.  I guess the word on the street is that the Angels are going to be sellers.

The big lawsuit is finally here about the All Star Game being moved away from Atlanta.  These guys are asking for over a billion dollars.  Rob Manfred and Tony Clark are both named as individual defendants in the suit.  If you are into NFTs (non-fungible tokens) then the NFT of Lou Gehrig’s “Luckiest Man Alive” speech will be auctioned off around July 4th.  If you have no idea what an NFT is then here is the Wikipedia article.  It is important to note that an NFT is not the same thing as a copyright.

Martin Fenn gives the Angels a D+ so far for the year.  Spoiler alert:  It’s because our pitching sucks except for Ohtani.

The New York Yankees are hiring for several different data and QA positions.

During the month of May the Angels starting staff did very well over ali and with Fletcher and Rendon having slumps along with no Trouty we are only 5 games out in the lose column and we are seeing improvement in some of the Bullpen arms. I think that it is possible to be even by the end of June or early July.

I judge this as that the Starting Pitching is doing it’s best and the line up while unexciting is running in the middle of the pack right now.

Phillip G in the lead

after taking a foul tip from the bat to the groin, initial diagnosis was only a contusion, additional tests provided a more concerning outlook. Garver underwent surgery “recovering well” likely points to an absence of some note.

Obviously Steve doesn’t have male genitalia after reading his description of the injury.

At the very bottom of the Box Score from these WBCS games there is this line.

TC: David Rivera (MEX), Shari Reiniger (CAN) What is a TC? (not total chances)

Th only baseball context I’ve seen “TC” used is total chances. If it’s not that, no clue

No idea what one does, but presumably making sure the site is running?

Apparently we didn’t need todays game to make the WBSC Super Round.

USA had 5 run lead in the top of the 4th…canceled due to field conditions.

We are matched up against CAN tomorrow at 4pm from West Palm Beach.

as I understand it we moved on with at worst a 2-1 record and since we beat the DR that would be the tie-breaker. We’d win the group whether we won or lost this 3rd game.

Athletes in literally every major pro sports league have now bashed the massholes for yelling racist things at them.

I’m not saying it was justified, but Kyrie did smack his foot all over that mad green troll in the middle of the court before the bottle flew. Some people’s priorities are wonky.

The “mad green troll” is actually happy. His name is “Lucky.”

If this young woman can punch a bear right in face…We can take 3 of 4 from Jerry’s Kids.

This video came up when I googled “woman punching bear.” ﻿ 🙄 ﻿ 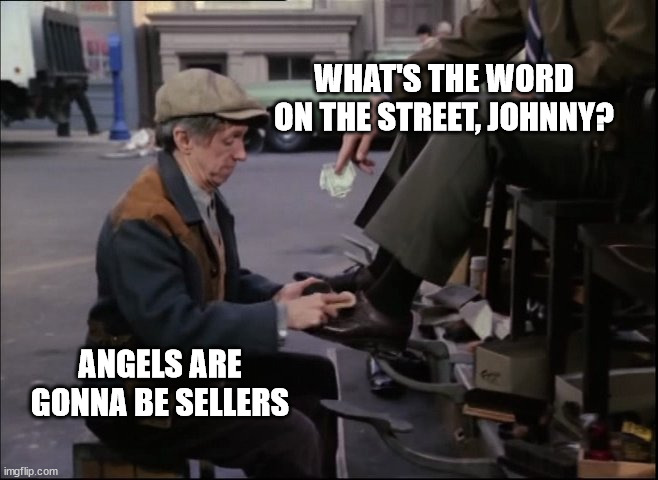 Exactly what the article said. Dylan Bundy, Andrew Heaney, and Raisel Iglesias. They might not bring back much in return, but who doesn’t need another Packy Naughton?

Bundy could’ve a year ago, but with his crash and burn collapse of 2021, probably not.
Heaney and both Iglesias’ can still bring something and possibly Mike Mayers too. Kinda what happens when you surround your best players on purpose with a bunch of garbage from a California EDD office in Fresno. Bundy & Mayers were both classic cases of buy low and sell high, and usual this front office held on to last yr’s gold that turned into crap this year in 2021. This is exactly why YKW up in OAK keeps on peeing on everybody else because he knows exactly when to lose guys like this before they blow up in our faces.﻿ 😫 ﻿﻿ 💩 ﻿

Why “sell” Iglesias when pitching is our biggest need?

He is a guy you want to resign, even if he is expensive. Despite the saber crew myth that closers grow on trees, they actually don’t.

Iglesias has experience at closing games and some early misuse notwithstanding he has been pretty damned good.

Last edited 15 days ago by JackFrost
1

We’re a very bad losing team with more holes than a sieve.
We need to just keep trying the Billy Eppler way ( with the exception of not expecting these guys to be good the following season and cut them or let them walk ). We should’ve traded Hansel Robles in 2019 to the Atlanta Braves for a minor leaguer ( PTBNL ). Someone last season ( no it wasn’t me BTW ) on this blog suggested we trade Dylan Bundy ( how does that idea look now!! ).

We don’t have “more holes than a sieve.”

You don’t know what you’re talking about. As far as position players go we are pretty close to set, with the proviso that RF will soon be filled by an internal solution of either Adell or Walsh.

It is true that Jose Iglesias is a potential departure but for the time being there is no hole at ss.

The holes we do have are in the PITCHING staff. Consequently, my desire to keep Raisel onboard makes sense. You don’t fix the holes in the staff by creating a new one,lol.

We’ll have money with Albert coming off the books. If we sign Raisel for something close to the 11 million he currently makes then we would STILL have that extra 34 million on top of our current outlay to cover the position of short-stop AND bring in a couple of very good starters.

For some reason you want to make this team worse, not better. We are not in rebuild mode FYI.

Last edited 15 days ago by JackFrost
0

Because you will get more from trading Iglesias than you will from watching him walk away at the end of the season.

It seems unlikely he will re-sign.

Why do you say it seems unlikely he will resign?

The current team has an advantage over others in that they can build a relationship (hopefully) and use that to intice said player to stay.

In fact, Maddon giving in on how he will be used may have been part of a larger project of laying the groundwork for him to possibly stay here.

Last edited 15 days ago by JackFrost
0

R Iglesias is 31 now.
You wanna make another ludicrous bet like Eppler did with Upton? How many more good seasons does he have left in his tank? I’d rather just take a chance with C Rodriquez ( sorry about the fact that the last GM laid the abysmal groundwork for our current position now ). We need the draft picks and the higher draft position even if AM is a coward. Besides Perry Minasian was supposedly a good baseball man and it’s time to either put up or shut up for him otherwise Arte should’ve hired Jeff Luhnow or Theo Epstein.

Let’s take a look at reality: Heaney, Bundy, and Iglesias need a few good outings in a row to increase their current value to anything worthwhile.

If they have a few good outings in a row during this soft-ish portion of the schedule the Angels will be about .500 and in the Wild Card race to some degree.

Arte ain’t selling if there’s a 5% chance of getting that WC.

Just having a sale for sales sake. Man, if they do that, the last few months we be LOLBAH-LL

Sell what you ask?

That’s Arte’s follow up to I Bought A Baseball Team and Laughed All the Way to the Bank (and you can’t, too!); I’ve heard the Billboards books isn’t as good.

Have to say I chuckled a bit when Mike Marshall was included on the ‘pitcher injury’ list along with Strasburg and Flaherty. Death would definitely qualify for the 60 Day IL. Not to mention he has notpitched since 1981.

Now today that is a whole lot of info to digest. No clue who martin Finn is but all by himself he came u with our pitching sucks.

Matt Garver does know the meaning of pain. Next time I hope he wears a larger cup. Then add surgery to the mix, yeeow. I took two hard ones and one as an ump from a prep pitcher and the other from a prep hitter on a foul tip. They were about 10 years apart and it get’s your attention every time. And this is with wearing a cup.

Well moving on, Good Morning to the Pearly gates Crew, I think I’m ready for a cup of brew.

I like how they said Garver’s “injury comes at a poor time.” (As though there is ever a good time to get smashed in the groin so bad that you need surgery.)