The Angels celebrated Mother’s Day with the Dodgers. Pictures were shown, flowers were given, and moms were celebrated all over. A pitching duel is what moms were given this Mother’s Day, a surprise gift to be sure, but a welcome one. In the end it was the Angels who got to celebrate the win, thanks to great pitching and Walsh.

Not the worst Q ever

Q made everyone panic immediately by loading the bases. But he got out of it. On 30 pitches. Yes, it was one of those games. Ohtani got a single but that was it for the 1st.

Walks bite Q again, and this time, damage was done as 2 walks and a hit gave the Dodgers a run. The Angels finally got to Bauer in the 3rd, with a Fletcher hit and walks to Ohtani and Trout before Walsh doubled in 2. 2-1 Angels.

For the first time, Q actually got a 1-2-3 inning and didn’t blow his lead in the 4th. But he got no more runs in the bottom half as Bauer didn’t walk anyone this time.

That was it for Q, as he allowed a double to start off the 5th and was immediately yanked. He went 4+ innings allowing only 1 run on 2 hits and 5 walks while striking out 6.

Slegers came in and stranded the runner at 2nd. It was time for more runs by the offense. But alas, that didn’t happen in the 5th as Bauer shut them down.

Aaron Slegers went out for another inning as the team desperately needed innings. He lasted an out as runners got on and Claudio came in. That was a good move as Claudio got the 2 outs to preserve the lead. Not that the offense did anything. Still 2-1 Angels.

Tony Watson came in for the 7th inning. It was a bit dicey but he got out of it unscathed. Gosselin got another hit on the day, but was stranded.

Mayers got the 8th. And by got the 8 I mean he shut down the Dodgers offense, allowing only 1 baserunner and no runs. Fletcher got a hit. Ohtani flew out. So Fletcher stole second, reaching 3rd on the throw. Trout struck out and Walsh was IBB-ed. So Walsh stole second with Lagares up, who was a defensive replacement for Upton. But Lagares struck out. Still 2-1 Angels.

Closer Iglesias came to save the game. A 1 run game. The first batter struck out. The second batter walked. The third batter singled through the hole. 2 on, 1 out, in a 1 run game. The next batter flew out to RF. 2 on, 2 outs, 2-1, and the last batter ground out to 3B. The Angels win!

The Angels are now 15-18 and go to Houston next. The hard stretch doesn’t end there because it is Boston after that!

Closer Iglesias, superior to all other forms of the same man…apparently

Great BP, great win!
With a tough week coming, hopefully the SPs can go a little deeper to keep these guys effective.

So maybe the Angels are just unlucky

No luck = no skill

Is this the first Mother’s Day that Mike hasn’t blasted one out for Mama?

How I feel about today’s win….

Some enjoyable baseball this weekend!

Trout was 0-3. Not been his best at the plate lately. Does he gave vision issues?

Took this screen shot with my phone two days ago. (Had to use Imgflip to show it) 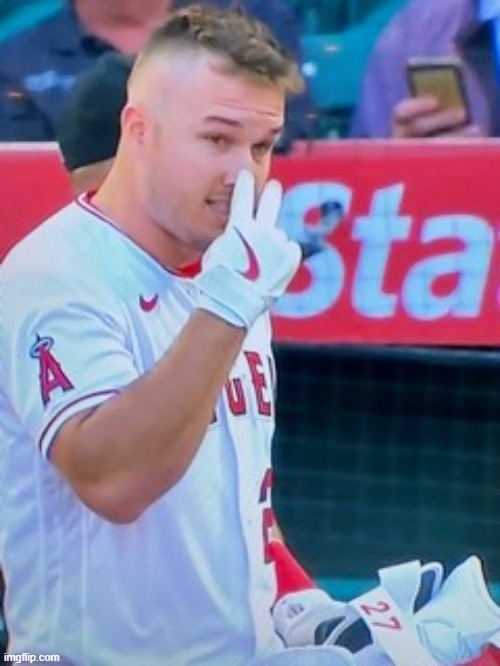 Old time scouts used to have lower grades for blue or hazel eyed players… thought they didn’t see the ball during the day as good.

A broke clock is still right twice a day 🤷🏼‍♂️

But all of a sudden? I don’t remember Mike complaining too much about this before, and we gave Hamilton, always deservingly, shit about this when he was complaining about the bright sun with light eyes.

They are not the only two blue-eyed freaks that ever played baseball.

Excuses are like assholes, we all have one. How yours is doing and if you want to talk about it is up to you.

He’s been hit by pitch 2x in the past week. Hasn’t looked the same since that last one

I know Mike would never say it, but I wonder if inside it bugs him that the pitchers are not protecting him enough…

They can’t even protect themselves. They can stay out of the pitching wars, before they really hurt someone.

His vision issues is not seeing Albert in the dugout

This game for me was the most surprising result of the year so far.

Obviously a pleasant surprise win and series victory over the hated Dodgers and their cocky, belligerent fans,

The pitching matchup of Bauer vs Quintana was the biggest reason I expected an LAD win. I mean Bauer came in with an ERA around 2.50 or thereabouts and Q had an ERA over 10.00 !!!

But as people say you never know in baseball!

Baseball is a crazy game. Anything can happen. But it usually doesn’t.

And when it does, it’s usually for the other team.

Is that the Angels corrolary?

The blowpen didn’t blow today but I’m not going to expect that to happen too frequently.

I was really pleased with Mayers and especially Iglesias. Raisel showed calm, cool closer experience, not wavering when the Dodgers got runners on.

I will say that I am concerned about how much he throws his change-up. It is a relatively easy pitch to hit out if you are looking for it and it is slightly misplaced (see HR he gave up to Manuel Margot on Monday).

I would prefer he use his fastball more since he does have a good one.

He’s got an elite fastball that he can place on the corners. He should throw that more often. I agree

Dear Q,
Apologies for my harsh criticism this year. The offensive language is totally unnecessary. Also, that awful “inside my head” comment, was only because it is Mother’s Day. Nice performance today and I’ll look forward to your next start.
Another thing, the 4 inning 90+ pitches, 1 or 2 runs, is cool with us, no worries, we will take it. Do it another 2 or 3 starts, who knows, you might become our Ace.

Great win. On Mother’s Day. The Dodgers fans really are a bunch of mothers.

Hate those fans. Funny – most of the Dodger gear I saw was new. Likely these are former ‘Angel’ fans rooting for the front runner.

Gosselin aka “Philly G” born right outside of Philadelphia has been surprising me. I’m still not confident in him or want to see him in the lineup but he’s doing good. Hope he can be an off the bench Johnny G spark plug 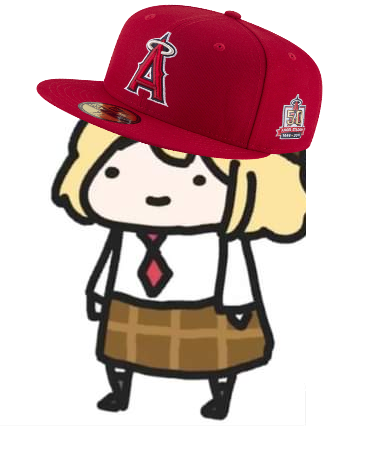 Dude has been an elite reliever every season except 2017 and 2019. I wonder what happened those years. Maybe variation?

I blame the Astros

Just my gut reaction anytime someone has a bad 2017.

Q with the quality start and Bauer still mad at Dave for taking him out!

Is he really? I wouldn’t be surprised. That’s why I said, in the game thread, that I wouldn’t believe Bauer was out until I actually saw another pitcher.

Don’t know for sure, but he wanted to stay in so I bet he’s mad.

113 pitches. What a goofball

Will easily take 2/3. Just didn’t think Quintana would start one of the wins, lol

we gained a game on Oakland, too

Color me… not too surprised. I predicted an Angels sweep but two out of three is acceptable. Post-Pujols turnaround?