The Angels lost today vs the Reds. It was a full game, a real, if still spring, 9 inning game.

Scoring started right away as Alex Cobb got hit hard and escaped with one run allowed in the first inning. Shohei Ohtani tied it up with a massive home run the other way in the bottom of the first.

Ohtani did it again, crushing it to left field and giving the Angels a 2-1 lead in the 3rd. Cobb calmed down and did not allow a run after that. Angels threatened in the 4th but came away with nothing.

Top of the 5th saw Félix Peña injured with a lower body injury and pulled. Reds capitalized on the new pitcher and scored 3 to take a 4-2 lead. Then in the 6th, scored 3 more, 7-2 Reds.

Angels meanwhile, did nothing until the 7th, when Jo Adell hit a solo home run the other way. 7-3 Reds after 7. After nothing in the 8th by either team, the Reds took a 7-3 lead to the 9th inning. The Angels did squat afterwards and lost 7-3.

One of the projected starters for the Angels and acquired from Baltimore. He did not do well to start, almost everything was hit hard and he was lucky that he did not give up more in the first. Cobb did no get any help from the ump, but blaming them is just a distraction.

But after that scary first inning, which is very Angels of him, he calmed down and pitched better. Many hard hit balls still happened, but also more swing and misses and weak contact.

The most reliable reliver for the team last yea. However, his spring has not looked ideal. Things were looking good with two easy outs but, after a misplayed groundball by Pujols, Félix Peña was pulled from the game with an injury.

Reed took over for Félix Peña with a runner on and did not hold the lead. He gave up 3 runs (one was technically inherited) and did not look good out there at all in his 2/3 of an inning.

As someone who had a 0 ERA this spring but wild, it was a matter of time before something happened. That was today with 3 runs allowed in his first inning of work. Hard hit balls and walks doomed him. Also the wild pitch.

His second inning was of an easy 1-2-3 variety which makes his previous inning especially frustrating. It looked like he had a twin, and a bad twin pitched and then a good twin did.

A rule 5 draft claim, he finally made his Angels debut. It was not bad. a clean 1-2-3 inning, albeit vs the backup Reds as they had pulled their starters. The 24 year old had a sense of belonging as he made it look easy.

A player wearing Weaver’s number while being born in La Palma and pitching well, he is already a favorite of mine. Looks competent and made quick work of the reds in the 9th inning. May make the roster, depending on injuries.

He still makes contact like no one else, but shows why the three true outcomes is so popular. Making contact go right at fielders is unlucky to say the least. He went 0-3.

Ohtani had a monster day. Two home runs, both the opposite way, he looks poised and ready to be a monster with the bat. If you are not excited about him this season, it must be the injury worry. Besides that, there is nothing wrong with him.

Trout at the plate has struggled, but he did have a great diving catch in center. I wouldn’t worry too much, but others are looking much more ready for the season than he is. Baby may be keeping him up still.

Rendon has looked locked in this spring and his eyes certainly were today. He had a walk and looked like last season, but did not manage a hit, going 0-2 in his 3 plate appearances.

Pujols has been oddly good this spring overall. Even though many of us would want him to retire already, seeing him do well does bring hope that he won’t be the worst player in baseball. Today though, he, well, did not look too promising, 0-3.

Our new defensive wizard shortstop had a double and single today. Maddon is looking to have him as the second leadoff hitter and looks to be 9th in the regular season when the time comes.

Looking to make the team

Our 3rd string catcher will most likely start in Salt Lake, but he showed off his arm by throwing out a baserunner trying to steal second. He may be up for about a third of the season due to inevitable injuries, but unless a that or a trade happens it doesn’t look likely this year.

Fowler has been pushed to be the opening day right fielder but has not impressed this spring. That included today where he went 0-2 with 2 LOBSTERS. He did get hit in the hand by a pitch that hit the bat first, but it isn’t more than a stinger.

My personal pick for starting right fielder, he got the start today after Justin Upton was scratched. He did not do well today, going 0-3 with a bobbled ball that allowed the runner to score without a throw.

With how many infielders that there are, making the team will be difficult to say the least. He was claimed off waivers from the Braves and has options but will take up a 40 man spot. Seems better than Barreto but with so many options, he needs to stand out more.

In his limited spring, he had hit well, but as someone not on the 40 man and 3 catchers ahead of him, he is not looking likely to make it. He allowed a ball to get past him and a run to score. 0-2 on the day.

Adell came in late to the game, but impressed nonetheless. He hit a mammoth home run off the giant scoreboard in right. Jo has talent, but even that won’t be enough to get him on the 26 man to start the year. Maybe by summer we will see a new and improved him.

Happy to be here

Played some innings in the field, and went 0-1 with a strikeout. Was moved from 2B to shortstop between innings and will be someone to keep an eye on in the coming years.

He misplayed a ball in the outfield that went over his head, the runners would have scored anyway, but it was not pretty. He went 0-1 with a pop up to first in his one at bat.

My favorite prospect and overall the top of the Angels farm if you do not count Adell anymore, he still has yet to play in the field, which concerns me. Marsh struck out in his one at bat.

Took over for Rendon at 3B and is another infielder that is a non roster invitee. With how many infielders the team already has, he is just here to hope that someone likes what they see. Going 0-1 with a strikeout did not help him, but an excellent catch at the hot corner made up for that.

The Angels are now 7-6-2 on the spring. They will play Cleveland tomorrow at 1PM. It has been a streaky spring for the club, as they have now not won in 3 straight after winning 3 in a row.

Overall, the Angels have struck out 10 times and only walked once. 6 hits, but only 3 runs, all of which were home runs. The pitching was more positive, with the majority of the runs coming with Reed and Sandoval. the rest looked good for the most part, with Cobb getting lucky in the first inning.

Thank you for the write-up. Couple of quick opinions…pen lacks proven arms, OF prospects all need to go spend a lot more time in the minors. Don’t heap pressure on them and just leave them down there. Sadly, we have past-peak corner OFs. I’m liking what the starters have shown to date. CRod waiting in the wings.

He really should not make the team

At this point, I would think my chances are better

Woah, the pitcher we got from the O’s who has been in the league for a decade, only started 33 games (mix of ST and official games), with an ERA of 3.63 got rocked? Why, whom among us thought that maybe this would be the place to turn his career around.

This comment confuses me very much. Who? Is a 3.63 ERA super bad now? Which of our pitchers is making remotely near 30M? 33 games in 10 years, really?

So what you’re saying is you already miss Trevor Cahill?

The Comments from Trade Rumors a few weeks ago must be true. Shohei is a Bust!

Stop it with the injuries, please thanks. 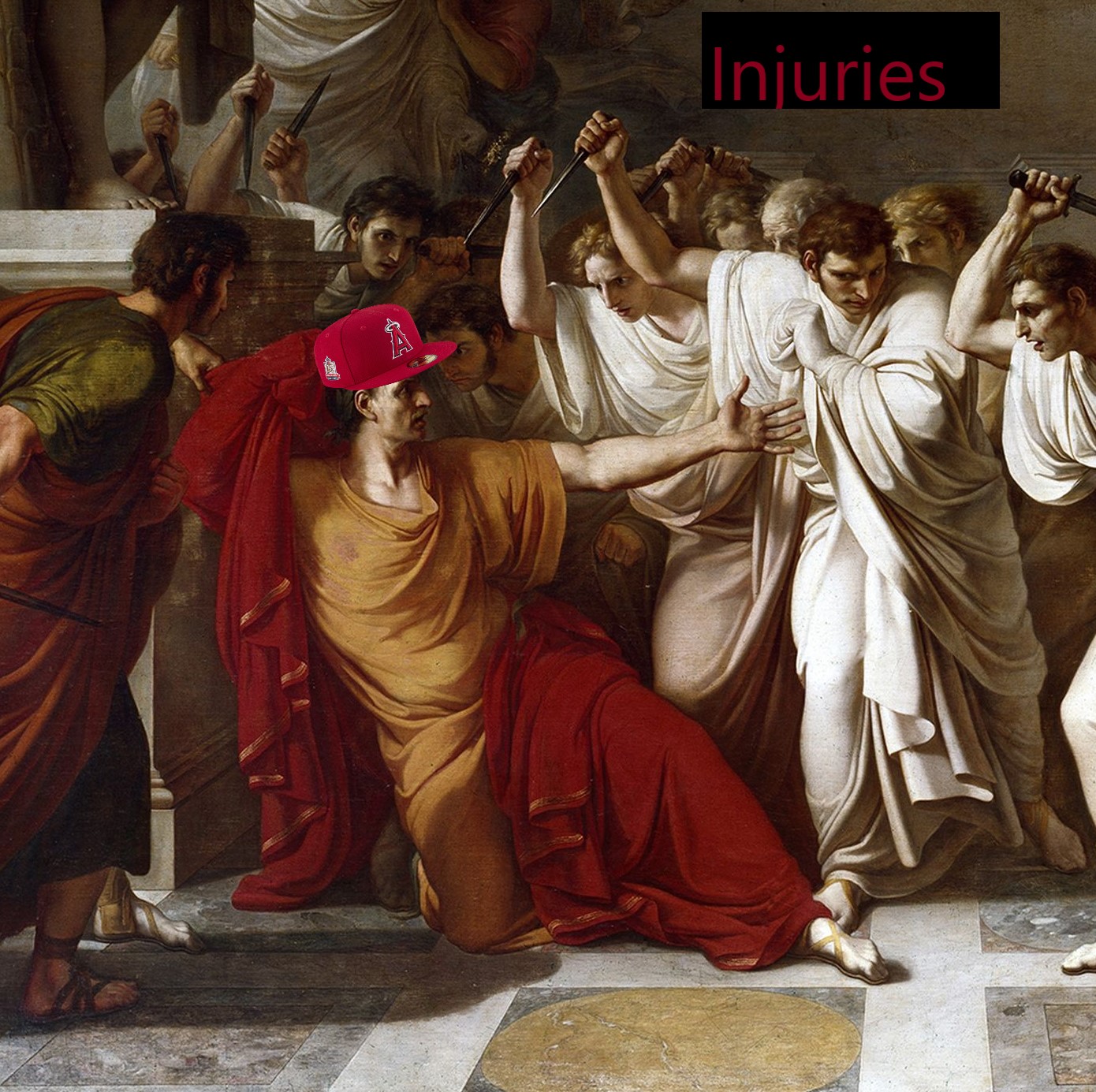