Spring Training games are finally here, and the Angels lost 10-8 thanks to bad relief pitching. It was a Michael Lorenzen start, although Spring Training starts are more like openers. Not many of the regular starters played, but still, it was nice to see baseball again.

Jo Adell, Brandon Marsh, and Michael Lorenzen played great, with all three looking ready for Opening Day already. Sure, it was against mostly MiLB players, but who cares? The A’s scored off of MiLB pitchers too.

Brandon Marsh led off the game by flying out. Tyler Wade singled, then stole a base. After a Rengifo strikeout, Jo Adell hit a 2 run shot to give the Angels the early lead.

Michael Lorenzen had the start, making his Angels debut. The former CSF pitcher was glad to be pitching for his hometown team. He set down the side in order to celebrate.

Mayfield got an infield single to lead off the 2nd. Gatewood hit into a fielder’s choice, and then got thrown out at home on a Martinez double. Despite 2 hits, the Angels get nothing.

Marsh led off the 3rd with a single. Wade flew out, but Rengifo hit a single to make it 1st and 3rd with one out. Jo Adell reached on an error, scoring Marsh. 3-0 Angels.

Brian Moran came in for relief, getting a quick 1-2-3 inning with two close catches in shallow RF. Still 3-0 Angels after 3.

Gatewood flew out, but Martinez got an infield single and Sierra doubled. Second and 3rd with one out. Thomas pinch hit for Marsh, but struck out. Marsh’s day was over as it is a goal to get as many players to play today as possible. Andrew Velazquez pinch hit for Wade and hit a bloop double, scoring 2. 5-0 Angels.

Zack Weiss was in now, and he allowed a double, losing the no hitter. He allowed another double, blowing the shutout as well. A single and a triple scored 2 more, making it a game again. A strikeout got the second out, but Maddon brought in Eric Torres, who ended the threat. 5-3 Angels after 4.

Adell grounded out to lead off the 5th, but Wallach hit a solo shot to get one of those runs back. 6-3 Angels. Mayfield hit a ground rule double, but Gatewood struck out. Martinez had a 2 out walk to put multiple runners on, but Sierra grounded out to end the threat.

Davis Daniel had the mound now, he almost got out of the inning cleanly, but a misplaced fly ball and a single allowed an earned ‘unearned’ run. A walk but the tying run on, and he was yanked. Zac Kristofak came in to end the threat. 6-4 Angels after 5.

Thomas walked and Velazquez singled to put 2 on for Stefanic. He didn’t disappoint, doubling in a run. 7-4 Angels. Riojas struck out, but Wallach walked to load the bases. Wong hit a sac fly for their 8th run. 8-4 Angels.

Zac Kristofak was pitching again, but the first batter reached on another error by the outfield. Rojas had it go off his glove for a ‘triple’. A sac fly made it 8-5. He limited the damage and got out of the inning still 8-5 Angels.

Angels went down quietly for the first time in the game. The Angels head into the stretch up 8-5.

Luis Ledo was in now, and he gave up a double and a single for another A’s run. 8-6 Angels. More hits and a wild pitch lets another run score. 8-7 Angels. He loaded the bases and was yanked. Dakota Donovan came in. Rojas made a great catch to hold the lead, 8-7 Angels after 7.

After Velazquez struck out, back to back to back walks made the bases loaded, yet a GIDP ended the inning. Still 8-7 Angels.

Now trailing for the first time, it was a last gasp to win. Trey Cabbage was up first, he struck out. Preston Palmeiro next, he flew out.  Bryce Teodosio was the last batter and struck out looking.

Astros got worse today. You love to see it.

Story will probably end up there…..he’s not Correa, but he’ll softened the blow.

Thats a good point. Even though he’s been mediocre away from Coors field, the added trash can help could turn his career around.

Story to Bahston. It’s debatable whether or not the Astro’s SS options are worse than our SS options.

I don’t care…..
BTW theyre still better than us.

dream is crushed. I guess we are going w/ SS by committee

Correa to the twins lol

His desired destinations must have dried up, 3-year deal, $35M AAV with an opt-out at the age of 30.

Well, at least this screws over the AssTros.

Opt out after each year? Thought it was after 2nd. Yeah, that would put him at 29.

shocked that this doesn’t have 5 or 6 thumbs up 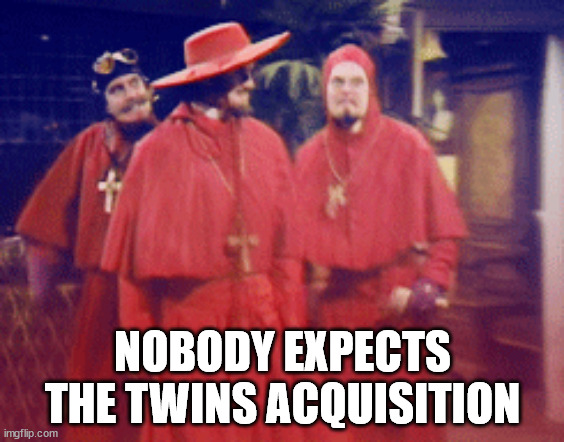 Great move by the Twins – they get a premium FA and avoid the long-term commitment and keep him Contract Year Focused because of the opt outs.

I’m also relieved we didn’t use pitching or Ohtani resources on Correa. Just hate the guy. It would be like when we signed Hamilton, if he was always hurt or under-performed the unpopularity would be a distraction.

Opt outs are not great for the team since they’re one way. The player is motivated to play so they can have one great season and never come back . if they are chronically injured or have an off year the team eats it.

Just Look at Trevor Bauer hes got 2 opt outs in his contract he’s sitting on his ass and still getting paid even though he probably still will next year too.

Cheap Ass Arte doesn’t like opt outs and to the best of my knowledge has never granted one. Despite all of his faults, I really cant blame him for that one.

Yet the one year deals are like opt out. If Thor has a good season he can “opt out” and go elsewhere.

I’m good with Opt outs, incentivizes the players to perform. A team should never extend the years if they were not prepared to pay for the full years; bad performance and injuries included.

I like the Twins aggressiveness, not one of the top teams but they are working hard to improve the team. The Yankee trade was so-so but they did shed Donaldsons non-performing contract. They are not done making trades.

“A team should never extend the years if they were not prepared to pay for the full years; bad performance and injuries included.”

Your comment doesn’t work based upon all the potential outcomes of Correas 3 year multi opt out contract:

So Why would a team commit up to $105,000,000 where they can only expect one good year of production? If a team is going to commit that much money you should be able to enjoy the entire potential benefit of that commitment and certainly not the entire downside.

Sigh, if only players would perform to the full extent of their contracts, too Pollyanna. Not the way it works. They forked out $105M and prepared to get screwed. Aka Pooohjos.

Last edited 10 months ago by FungoAle
0

all the potential outcomes

Last edited 10 months ago by Twebur
0

I stand corrected. ALMOST all the potential outcomes

Exactly. Either way the team will only get the benefit of one good year. But at least they’re not stuck with a multi year albatross.

The biggest issue I have with Thor’s 1 year deal is not the duration but the draft pick we gave up. Unfortunately You cant get those back even though next year the QO draft pick system will likely be discontinued.

I remember doing a correlation analysis on a variety of factors ultimately trying to figure out if spring training results translated into winning in the regular season, even after many years. The reality is there was almost no relationship.

Also, open letter to all posters, I enjoy reading most everyone’s opinions, hyperbolic and measured, pessimistic and optimistic, emotional and logical. Nobody change, it’s part of the fun.

Last edited 10 months ago by nishiogawakun
6

Even though it makes sense that spring training records should have no correlation on regular season records (certainly if the non roster scrubs are mopping up the later innings) I don’t think thats entirely accurate. The 1989 Elias baseball analyst did a related essay on this issue . I think they were focusing on the Baltimore orioles who finished dead last in 1988 at 54-111 but then finished second in their division in 1989 at 87-75. After analyzing the Orioles as well as other teams from the past , Elias concluded that if a team had :

(1) a severely negative record in run one games in the previous season (about 10 games under 500). And (2) they had a winning spring training record that was at least 150 percentage points higher than last seasons final record, it was virtually a statistical lock to predict that they would win between 10 to 15 more games than they did the previous season.

So I’m not so sure if this rule applies today but it stands to reason if you had a long season of blown leads and bad luck you might show significant improvement with the right kind of personnel & bullpen upgrades.

But how did they do that without Scherzer? Or at least Stroman, or a trade for Bassitt? What championship caliber aces did the O’s bring in and how did they show the fans they were committed to winning before the season started?

Lots of positive for the first game…I’ll focus on those.

Never too early practicing to lose games we should’ve won.

The home run was great, but I was actually more happy that Adell just plain looked solid and comfortable most of the time. He’s always gonna strike out with his big swing, etc but he looked a lot more at ease in the field and at the plate.

I noticed he is keeping his hands still just to the point he starts to swing. It was a game changer for Walsh and looks like Adell made the same adjustment. Maybe, just maybe we are finally developing our youth.

That pauseface on Lorenzen is awesome.

Also, YARRR! How could the Angels blow that lead! This team is for the birds I tell you! Clearly this means Lorenzen can’t pitch! Everything PTP has done is a travesty! I bet even his poops come out sideways and blue! You can already tell this season is a lost cause!

Everything PTP has done so far this season is fine. Unfortunately it appears he’s under the impression that he’s done enough.

It appears he’s not done after all. 2 good RP signings this morning.

They actually occurred on Friday. I was already counting those.

So whichever player hit into GIDP wins the Albert Pujols game award? Or is it the HK 47 award?

That would be Kean Wong with the bases loaded and one out in the 8th.

I thoroughly enjoy having baseball on my tv. And WFH means many of us won’t miss those day games anymore.

Oops. I only had time to watch up to Adell’s 1st inning home run and was going to watch it later. Gotta remain to think before refreshing this site.