The current MLB lockout, like pretty much everything these days, boils down to money. In the first segment of this series I laid out a plan to ensure revenue sharing funds ended up in the pockets of players and not owners. A salary floor tied to funds that are already supposedly earmarked for player salaries should be an easy “yes” and lead to the harder talks.

As a fan I love the players asserting that tanking is a competitive balance issue. Nobody wants to watch bad baseball teams whose front offices aren’t even pretending to want to win.

That said, this stance does back the players into a corner a bit when it comes to the luxury tax. If they truly want a competitive league with each team having a shot at glory, you can’t have one squad spending three times as much as another. That wouldn’t bode well for competitive balance.

Oops. Not the way the MLBPA wanted that one to go I’d imagine.

The current luxury tax system is rather complicated, it generally only affects one or two teams, and even then only in certain years. Plus the number is set rather arbitrarily and often provides a clear incentive for big market teams to avoid spending on payroll.

Also, there needs to be some phasing in of the tax. The current all or nothing makes little sense and really creates a soft salary cap. Plus the ability to get below the luxury tax threshold to reduce future tax payments creates disincentive for large market clubs to continually go big.

Here’s how my progressive tax system would work, using $125 million as an estimated salary floor for 2022.

186%+ of floor is a 50% tax. This is designed to keep the Dodgers and Yankees from simply running away from the field. Any dime above $231,250 and you get to kick in a nickel. You obviously have it.

There is no resetting, no multiple year stipulations, etc. Payroll is calculated at the end of the year and taxes are levied based on which bucket(s) apply to your scenario.

After 2021 only two teams paid luxury tax and the calculations are complex. Now let’s compare that to my system.

Nearly identical to the number they paid this year in real life but with no possibility of resetting it to zero so they can lap the field again in the future. For their part, the Padres would have paid about $4.6 million this year opposed to the $1.3 million they actually paid.

In taking a look at 2021 MLB payrolls, a total of five teams would have paid some level of tax, all but two only the first tier in my system. All in all it would not impact the spending of most clubs nor would it have a huge impact on the total amount of luxury tax paid each year. There would be a jump and the teams paying it might rotate a bit as competitive windows open and close, but really you can count on the top 7 or 8 markets paying this most of the time.

What do do with the money? Great question.

I’d create an escrow fund which holds the money and distributes it to clubs to use on payroll based on inverted market size. The smallest market team could access 7% of the funds in that account with the 10th smallest market club able to access 0.5%. There would be a sliding basis between those two points.

So let’s say the Pirates, finally forced to spend money, are sitting at $120 million in payroll, must spend another $5 million to reach the floor, but prefer a guy in the $10 million per year range. No problem, offer the deal, apply for the luxury tax funds and offset the difference.

It would be pretty silly for a team to set a long term payroll hoping for luxury tax funds that may or may not be there. I realize that. But year after year we see utility players, mid rotation starters, and bullpen arms that are worthy of an MLB job who don’t get them.

So, now we have a floor to increase player pay and competitive balance. We have a tax system that makes sense and should help keep the big markets from running away from the smaller markets. And we have yet another incentive for the owners and players to work together to grow the game. As the revenues increase so will the salary floor and luxury tax thresholds. That is better for all involved.

One aspect this could really impact is the trade market. That’s definitely an article for another day but adding a contract or shedding one midseason could impact a lot of clubs. Moving that $8 million reliever might get a team down a bucket, adding him might kick the other team into one. But with the progressive tax system it shouldn’t impact the franchises enough to really sway decisions.

The problem is why force small market teams like the Pirates, Reds, Rays to give a big long term deal to a star player like we did to Mike Trout? The Pirates used to have a star CF (Andrew McCutcheon). These teams can’t afford to keep a guy like Mike Trout and pay them a insane amount of money for a long time.

Nice write up. I would probably start the no tax ceiling at your 2nd tier, with the 125m minimum spending on payroll. Then take the luxury tax money, split it between MLBPA and ownership, and put the MLBPA portion toward retirement or disability insurance for MLB players and MILB players.

That’s a great plan. Wish I’d thought of it.

I just figured that the MLBPA would look at this as a series of soft caps that could limit the occasional free agent signing so I tried to find a way to put that money back into the hands of players.

I think splitting that money creates a partnership with both owners and MLBPA having a stake in making it work and the MLBPA monies could be used for it’s members equally.

Here’s what I read:

I won’t comment on the quality of the idea, because that would undermine my snarkiness. 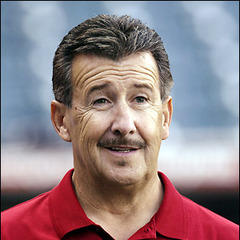