Credentialed media may once again have clubhouse access if the MLBPA gives its approval. This constitutes a potential relaxation of COVID-19 related restrictions.

The Rockies extended Bud Black through 2023. Dave Roberts might also get an extension from the Dodgers.

I can hear it all now. “Who me? There are lots of guys named Harvey. It must have been one of those other guys.” I joke. Matt Harvey has apparently been granted immunity so he can get into the details of what happened in the Skaggs affair. It’s still not a very good look for Harvey as he tries to hang on to the remnants of his career.

This article predicts Jo Adell will hit 28 homers in 2022. Of course, that presupposes that there will be a baseball season in 2022.

Here is a gameplay reveal of MLB The Show 22 which, of course, features some virtual Ohtani.

Rob Manfred will address the media today. Who knows what he will say?

Former MLB outfielder Gerald Williams died of cancer at the age of 55. Jeremy Giambi also passed away, in his case at the age of 47.

Here is a classic dig at Joe West by Andre Dawson.

Jim Riggleman is now the Manager of the Billings Mustangs.

Damn Hippies. What the hell is Oscar Goldman going to do to stop Steve Austin form impaling George?

Last edited 11 months ago by Twebur
1

I remember that team. We mostly called them the LAms.

What will Manfred say?

“We’re changing the rules to play the game under a 60 minute clock. We will also be changing from a diamond to a 100 yard long field, and the ball will now be a prolate spheroid”.

Better not deflate your prolate spheroid

…. Or confuse it with your prostate and hemorrhoids.

Last edited 11 months ago by Twebur
1

Terrible to hear Giambi passing, I’ve actually lived next to his and Jason’s cousins. Seemed like a great family. Prayers for the family.

Well, that Andre Dawson line is just about perfect. No, it is perfect.

Giambi at 47 is scary. That’s way too young and just a tad older than me.

I always feel most for the parents. Having to bury a child is a pain nobody should experience.

Good for Bud Black getting a well-deserved extension. Maddon is in his last year with us and so far in his 3 years there has not really been nothing normal in terms of a MLB season. Resigning him would show some stability.

I can definitely get onboard with keeping Joe around for a while yet.

Good morning sports fans. Is figure skating a sport? I think so, so last night we won a Gold Medal with Nathan Chen having his best performance ever. Congratulations go to Nathan Chen.

Americans won games in both Men’s and Women’s Curling. Fun to watch for sure.

Yes. I would understand the efforts to refer to figure skating as an athletic competition if the word sport was originally associated with the narrow group of activities everyone agrees are sports. In that case, people would be resisting the broadening of a definition.

However, historically the word sport is much broader and basically means amusement. Thus, the efforts to exclude certain activities are not protecting the original meaning of the word. Rather, those efforts are the ones seeking to change the definition of sport by narrowing it.

Also, there is no good narrower definition.

Sports are played by athletic individuals. Is golf a sport? What about overweight pitchers/DHs, what about the center on a football team?

Um, sports have an active component, so golf, bowling and billiards are okay, but not chess. Did you know that chess tournaments burn a tremendous amount of calories and that new science is suggesting aspiring chess masters should physically train to improve their endurance? So why include bowling but not chess? Also, where do Nascar, sailing and horse racing fit into this?

Sports don’t have a subjective component. There goes football again (spotting the ball, calling penalties) and baseball (strikes/balls/fouls/interference/balks) and pretty much any game with some kind of penalty or foul, but you’ve kept chess and bowling.

Okay, sports can have minimal subjective components as long as they have objective scoring. I guess boxing isn’t a sport (a win by decision is subjective). Also, downhill skiing is a sport but moguls aren’t (judged on form) nor is half-pipe, big air, ski jump, etc…

Nobody will ever agree on a narrow definition, so let’s just stick with the broad one and include them all.

…and even include FAT people. Define fat?

Sports are played by athletic individuals. Is golf a sport? What about overweight pitchers/DHs, what about the center on a football team?

How cute is the Norwegian Men’s Curling team playing in their pajamas?

Wait …..What? There is an Olympic team playing in their pajamas? Like, real pajamas, or just uniforms that look like they could be pajamas? I have not watched a second of the Olympics as I have been slammed at work and then living the Little League parent life.

﻿😂﻿ I actually know where to get those pants, or ones pretty damn close. I get my golf shorts and Hot Dog pants from them. Now I’m a fan of this team!!!

At the Pujols golf tourney, this slave to fashion was working on his putts 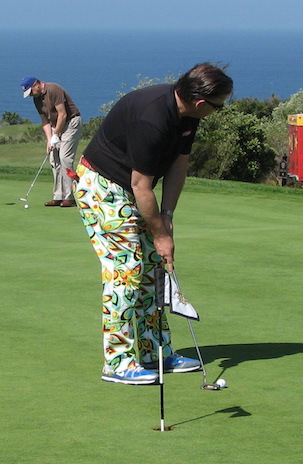 Obviously not you. He’s wearing pants.

The sign out front says “No Shoes. No Shirt. No Service.” It says nothing about pants being mandatory, so that’s my legal loophole.

There was actually a bit of an uproar because they went with boring pants this year.