The Angels leave Boston with a sigh of relief as they narrowly avoid being swept. Q was decent but didn’t last 5 and the bullpen blew it but the offense scored enough to save the game. It was one of highs and lows that ends on a high note somehow.

The Angels went down in order in the first. So did Boston.

In the second, a Rendon HBP and a Walsh double made it 2 on, no outs for the Angels. Ward drove in Rendon with a single. After an odd groundball that resulted in a Walsh out, Gosselin doubled in Ward, Butera singled in 2, and it was 4-0 Angels. Q responded with a shutdown 1-2-3 inning.

That good scoring didn’t happen in the 3rd, as they went down in order. So Q had to not be good either, allowing 3 straight hits and giving up a run. Just the 1 though. 4-1 Angels.

No scoring again in the 4th, as they left a baserunner stranded. Q had himself a 1-2-3 inning though, seemingly refocused.

They at least tried in the 5th, but Ohtani was thrown out at home. Q gave up a solo shot and was pulled. 4 and a third, 2 runs allowed. Slegers came in with a runner on first. And allowed another hit. And a 3 run home run. 5-4 Boston. Cishek came in and limited the damage.

In the 6th, Churches was HBP and the Angels did not score. At least Boston didn’t score again either.

The 7th came, nothing from offense again. Strickland came in for 2/3 of an inning. Got 2 K. Then Watson finished it off.

Walsh got a single against the shift. Ward walked. But no runs scored as they were stranded. Again. Closer Iglesias came in and didn’t allow runs in a non save situation, somehow.

Down to their final out, Trout pops up to RF… and it drops. Base hit. The first in what felt like ages. Ohtani is up next, and he gets one around the pesky pole! 6-5 ANGELS!

Mayers was up for the save, and he walked two batters. But he got nerves of steel and stranded them , securing the save!

As the team is now 17-22 on the year, the easiest part of their May schedule is next. The Angels return home and face Cleveland and the Twins for a double header. Drink responsibly.

Feels good to steal the game away from the oppositions bullpen for a change. While Mayers caused me to consume one additional pint, I like what he brings. The upper strike zone punch outs were HUGE. In my mind, Mayers was a question mark coming into this year as being able to repeat 2020 but gladly choke off my fears, I think Eppler stole this one. Curtail the walks Mayers and keep bringing the four-seamer. Great win.

I think they won because I wore my new CtPG gray t shirt while watching the game. That’s my story and I’m sticking to it.

I wore mine today, too!

If you do laundry does that make you a Dodger fan?

When was the last time a Dodgers fan did laundry? If you take a deep breath in the Chavez Latrine parking lot you will most likely come up with a date around 1987.

Lifetime or this season? 😉

If Shohei wants to run for Planetary Maximum Overlord, he has my vote. 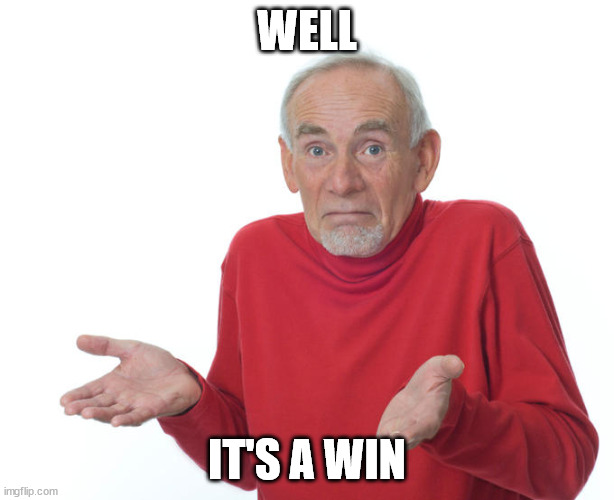 And we’re no longer in last place. Woo hoo!

Why not. Better than a few of lack o depth trainwreck lineups they’ve rolled out there so far. At least Marsh as hype over Rojas, Ward and any other player they’ve thrown out there.

Trouty in the 2 spot here to stay? Regardless of the fact we don’t have a lead off hitter?

Or, does it finally make sense just to let him lead off.
2- Sho, 3- Walsh, 4- Redon or flip Walsh Redon, 5-9 who ever shows up to play and sucks least……..(Fletch excluded from the “Sucks” list, when he gets healthy, if he’s hurt, and we all hope he doesn’t suck, because that would suck)

More AB‘s is better. Do it Joe.

It’s been reported that Fletch has been having both hip and groin issues.

Carrying around $25 million can do that

Someone should tell him not to carry it all in his back pocket. Throws off the hips.

Hear the same thing…hope it explains it.

I won’t even ask them to give us a time frame for his purported injury. It would get messy…did you know he was hurt, if so for how long, did he hide it, what about the medical and training staff, did they know, if they knew why did the wait till today, was he receiving treatment, if you knew was it smart to continue playing him, if you didn’t know why not… blah, blah.

Yep! And the Angels’ track record of fudging to the public about the extent of injuries.

We have to simply hope they’re only nagging and he comes back and looks like the Fletch we knew the last 2 years. I for one don’t think his recent bank account bump has made him “suck.”

I suspect he’s the kinda guy who can overthink at the plate. His strikeouts are up, but also: he’s hit a ridiculously high number of liners right at fielders.

Isn’t he a newlywed?

Interesting (implied) thesis.
If Mrs. Fletch would get on top we’d be 8 games over .500 by now.

As I like the traditional LRL, Walsh,Trout,Ohtani,Rendon would be my preference.
Sho is more of a cleanup guy than OBP(especially 2021), so bat him after Trout.

Yeah, I like Ohtani after Trout so he can steal and not just have them IBB Trout.

I decided to skip the game and take the dogs on a hike.

Ohtani is not human. Not even a little bit. 4-way tie for HR lead.

Now I know why we Won!

The top of the order1-4 were 0for16 prior to the Trout AB in 9th and I was preparing a 400page document to blast them.
Glad that I can scrap it to rewrite a 3page document to praise them now!
Although the pitching wasn’t ideal, this team is designed to win 6-5 by outhitting their opponents so keep it rolling!

Missed the game but saw a replay of Ohtani’s homer. That was the highlight of my day!

Strickland looked good. Trout got a hit. Ohtani won it for us. I liked the way he clapped as he circled the bases. I wish the clip included him scoring and seeing how Trout reacted at that point. I’ll see if I can find it on yootoob.

I tuned in on the radio while driving literally as Trout was coming to the plate. It was incredible! Especially Terry’s resignation when he thought that Trout had popped out, which turned into great excitement when it fell in; and then his calling Shohei’s drive a foul ball before shouting “No! They’re saying it’s fair!” First time in forever that the Angels have felt good, and I didn’t even have to suffer the rest of the game for it.

Even though I need both MLB.TV *and* a VPN to be able to watch a game but listen to Terry & Mark rather than the TV twits, it’s worth it. (I don’t have cable, so it’s really the only option if I want to watch games.)

I also use mlb.tv but I wish it also had the pre and post game attached

I do miss Alex as well

Yeah, I did not hear Terry’s typical “tight-to-the-line” call on the Ohtani homer. Even he was fooled. Based in the camera location and feed, that ball looked clearly foul. Love that Johnny Pesky guy.

In Terry’s defense, Terry was making that call from Anaheim.

Which at this point in the season is completely ridiculous. Cheap ass Arte and all the other cheap ass owners and Bally Sports executives are screwing us all.

You can’t effectively call a game from a trailer 3000 miles away with limited camera angles.

Soggy Joe is right its a different feel and vibe being on or near the field in person rather than remotely.

If 8,000 whiny Chowd fans can attend the game so can our announcers

Yeah, as I was indicating, the camera feed was very misleading. Even from his chair in Anaheim, Terry’s describes balls down the line is his customary way. But this one really was deceiving.

Sutton needs to be DFA’d. But, with his phony enthusiasm and “up” style, I am sure the percap counters love him

Why am I the only person who likes Sutton? Only criticism i can make is that his bangs look like Cameron Diaz’s bangs in “There’s Something About Mary.”

For me it’s his style, which I don’t remember the last time he was here, the modern, homer, “pump up the fans, pump up the nOiSe!” which grates on someone who grew up with Enberg. Scully, Curt Gowdy, Jack Buck, Ernie Harwell, etc. just told me what was going on, usually with a little backstory.

Really, to the point where I’d rather listen to… (I can’t BELIEVE I am saying this) Joe Buck

Really, to the point where I’d rather listen to… (I can’t BELIEVE I am saying this) Joe Buck

I’m fine with him, and giving him a pas through next season. I remember people railing on Victor when he started.

I’m there too. Given he’s working out a new partnership w/ Gubi, it’s a weird pandemic year where they can’t travel on the road with the team, and that he has to split games w/ Vasgersian… I’ll give him a pass for the season and see how I feel at the end of it. He may be trying a bit too hard to make an impression, but over the course of 130+ more games…

I F-ING!! demand the Dancing Robot to make an appearance!

Rules are made to be broken!

Right after I turned the game off. Terry said “Angels down to their last out” and I switched over to XM Underground Garage. Blast and damnation!!!

That’s how the pros do it!

Thank you for your sacrifice.

I turned on the radio hearing Terry call Trouts ball as it was up in the air.

Thankful they won obviously but Maddon’s bullpen management continues to baffle. Certainly starters going longer and relievers doing the job would help but like most things, he still feels like the wrong hire for what this team needs.

This just in: The Pope already declared today’s win a “MIRACLE”!
Smoke coming out of the chimney is red!