The Angels won thanks to a good bullpen today by C-rod and Watson, who ground pounded the Rangers bats that Cobb woke up. Ground ball pitching isn’t flashy but it got the job done.

Alex Cobb was bad for the second time in a row, allowing 3 runs in 2 innings. It was rough as the starting pitching continues to disappoint. This was after the Angels scored 4 runs in the first inning, giving him a good lead.

C-rod came in for the 3rd and pitched 3 and a third scoreless innings of relief. He is looking great and gave some much needed good innings out of the pen. Demands to put him in the rotation skyrocket yet again. It was as if a new starter came in and was dominant.

Which was highly needed as the offense didn’t do anything after the first. Ohtani hit a double that was inches away from a home run but that was it. No runs scored from the second to 9th does not a win make.

Watson got the last two outs of the 6th on a one pitch gidp. He then easily took are of the Rangers in the 7th to preserve the lead. Watson ground pounded the Rangers and got through his 1 and 2/3 to bridge the gap to Mayers.

Mayers escaped the 8th that was made dangerous due to a HBP and a bloops single. The pressure was enormous as again, the offense did nothing since the first. He seemed to have gotten this groove back, which is a relief.

Closer Iglesias came out for the save, making the fans hold their breath. A one run lead was all he was allocated. It was enough as he shut the door on the Rangers, saving the game and winning the series.

Up next is the red hot Seattle Mariners. Heaney takes the first game at 7 pm on Friday.

Thanks for the write-up!

Quick suggestion: For future articles, can you elaborate on offense stuff like this “This was after the Angels scored 4 runs in the first inning”?

I usually only read these recaps, as opposed to reading the box score, so I’d love to know who did the damage 🙂

Sorry. I usually do but I was late getting this one started.

So they won, even though the starting pitching only went 2 innings? Unpossible.

Bye Texas, enjoy being the only team under .500!

Soggy Joe realized that Cobb only had a Game 5 Donnie Moore Splitter Tonight so he was right to exercise the early hook.

I was there and it was horrible.

Worst on field baseball event ever.

2nd was Gibson’s homerun…kill me!!

I remember after the second out in the top of the ninth how the aisles of the Big A flooded with fans ready to storm the field. My Dad tried to caution the fans this was a big mistake (he was an Anti-Mauch purveyor and an early survivor of Angel failure) The end of that game lives with me to this day a nightmare. To paraphrase Sir Charles: 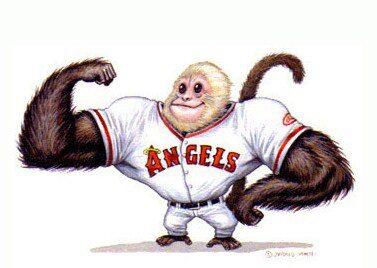 I think that monkey is on MED’s (Manliness enchancing drugs)

Wait! I thought that was for when Christie sees Grant Green in a game?

if Seattle holds on we’re back in 3rd. Oakland has lost.

We want Seattle to win tonight. The Angels don’t do well facing teams mired in a losing streak.

Correct. Otherwise they would break out of the losing streak/slump against us!

So we’re like the rally thong for slumping teams?